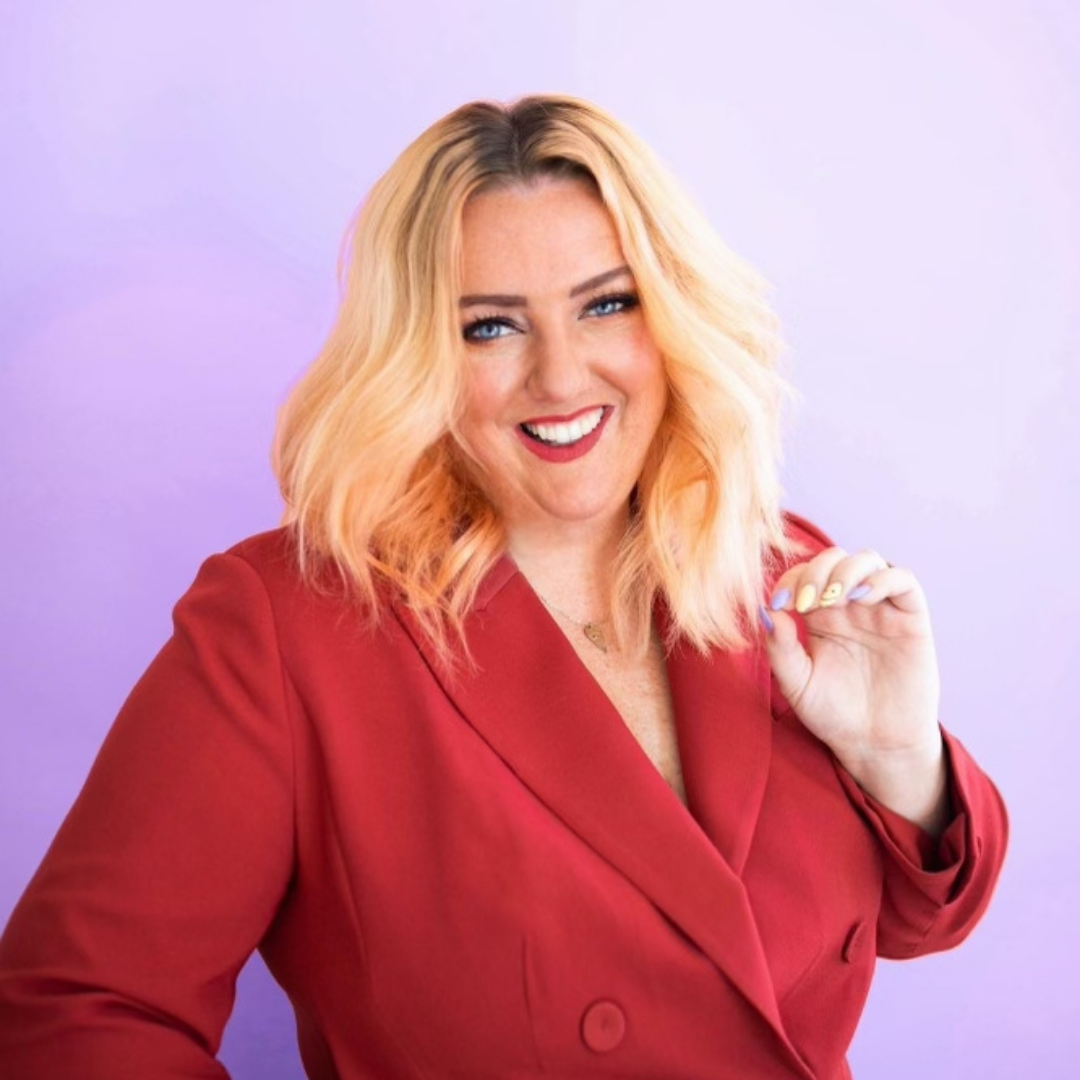 “When you’re a business owner, you can feel like you’re on an island. When I joined TEC, my company was at the stage where things were going well – but I was starting to wonder ‘what if they don’t always go well?’ I was thinking about everything I should be looking out for and trying to strategize about how to avoid those common pitfalls.” – Amanda Buhse, CEO & Chief Creative Officer, Coal and Canary + Co-Founder, Piper & Perro, and TEC member

Somewhere in between becoming a multi-award-winning marketing maverick, entrepreneur, speaker, and overall creative force – Amanda Buhse built a brand from a $40 investment to a multi-million-dollar business. As the CEO and Chief Creative Officer of Coal and Canary – a producer of luxury small batch hand-poured soy blend candles – Amanda has never lost sight of her mission: “We are in the business of fun and happen to make deliciously scented candles second,” she affirms.

The origins of how Coal and Canary came to be are inspiring. After nearly losing her life during a medical emergency, Amanda wasn’t expected to survive the surgery that saved her. While at home recovering, she became flooded with reevaluation, a new life perspective – and visits from her best friend who was eager to share his love of candle-making with her.

What began as a creative outlet morphed into a passion and then into a business that made Amanda wonder: “How big can we make this?”

By tapping into Amanda’s expertise in marketing and web design, Coal and Canary’s early success is a testament to the power of a great brand. After Amanda sent an inquiry to the company responsible for creating the gift bags given out at the Oscar and the Grammy Awards, the company searched online to learn more about Coal and Canary. The result? A near-immediate request to have Coal and Canary candles in every bag designated for the Hollywood stars – despite Amanda not formally applying for the opportunity and thinking it would take many more years until something like that was plausible.

“We were making hundreds of candles to fill that opportunity – right in my kitchen after we’d come home from our 9-5 careers. Then, our initial shipment was stolen from the delivery warehouse, and we had to do it all over again in less than a week – it was insane,” Amanda recalled while laughing.

Fast-forward seven years to today, and Forbes Magazine has since recognized Coal and Canary as “Canada’s favourite artisan candle”, its staff has grown to 23 employees, and revenues are in the multi-millions – a progression that has happened all while under Amanda’s leadership.

Being an Entrepreneur Is Tough. Luckily, There’s Support

Amanda is part of TEC’s growing community of 1,800+ CEOs, leaders, entrepreneurs, and executives across Canada.

When asked what inspired her to join TEC, Amanda revealed “When you’re a business owner, you can feel like you’re on an island. It can be really lonely. When I joined TEC, my company was at the stage where things were going well – but I was starting to wonder ‘what if they don’t always go well?’ I was thinking about everything I should be looking out for and trying to strategize how to avoid those common pitfalls.”

After briefly pausing to acknowledge that only 25% of new businesses make it to 15 years or more, she continued, “No matter what your situation is, whether you have a business partner or are doing it alone, professional development is important and key for success. I knew that having a support system of like-minded people – and a close-knit circle of smart, supportive, entrepreneurial people – would be a great thing for me or anyone in business.” 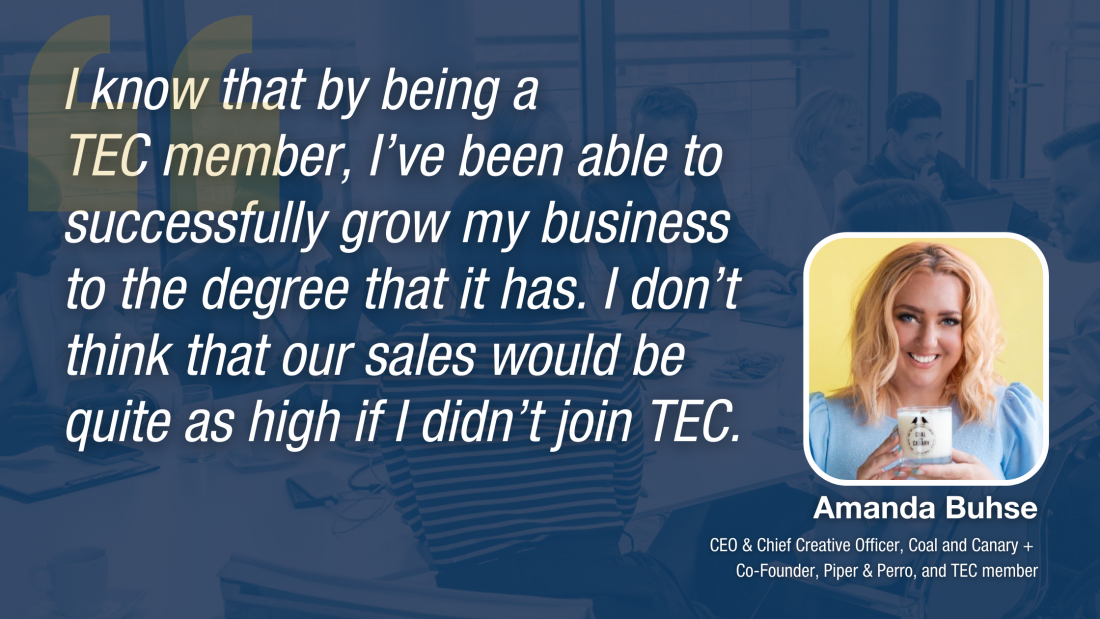 How Does TEC Canada Support Entrepreneurs with Their Biggest Breakthroughs?

When detailing other aspects of TEC that continue to help both her and her business flourish, Amanda recognizes that her TEC Chair – Joanne Sigurdson – has been a fundamental component of her personal and professional excellence.

“Joanne challenges me in ways that no one else does. She understands the ins and outs of my business. She gets my challenges – but she’s not afraid to tell it like it is. She keeps me extremely accountable. As a result, it pushes both me and my business forward,” said Amanda.

She continued, “I know that by being a TEC member, I’ve been able to successfully grow my business to the degree that it has. I don’t think that our sales would be quite as high if I didn’t join TEC.”

“Absolutely. I remember having this little fear before my first meeting and wondering ‘is it going to be another boys club?’ or if I’d be walking into a room full of suits where the tone was too serious. In hindsight, the fact that I was even thinking that frustrates me, but I’m happy I went and that I was pleasantly surprised. I immediately noticed a lot of different representation and many other females in my group – which I’m very happy about – and I’ve made incredible connections as a result.”

What’s Next for Amanda Buhse?

When asked what’s next on her radar Amanda says, “big dreams”.

“I just hired a General Manager for Coal and Canary yesterday – which is something I wouldn’t have done if I wasn’t in TEC. Joanne has been pushing me to get to this point, where I’m set up to work on the business and not be working in the day-to-day of the business. She’s also been a big part of helping me allocate my attention between Coal and Canary and the latest brand I just launched with my business partner, Piper & Perro,” said Amanda.

“I’ve also recently joined the Big Idea Speakers Bureau. My goal is to inspire audiences across the country to live a life of their own design by showing up as the truest expression of themselves,” she continued.

Whether she’s delivering keynote presentations for companies like Verizon or leading the team at Coal and Canary to bring deliciously-scented joy into people’s lives or building a Canadian perfume house that breaks the mold and defies expectations – one thing is certain: The story of Amanda Buhse is just getting started.