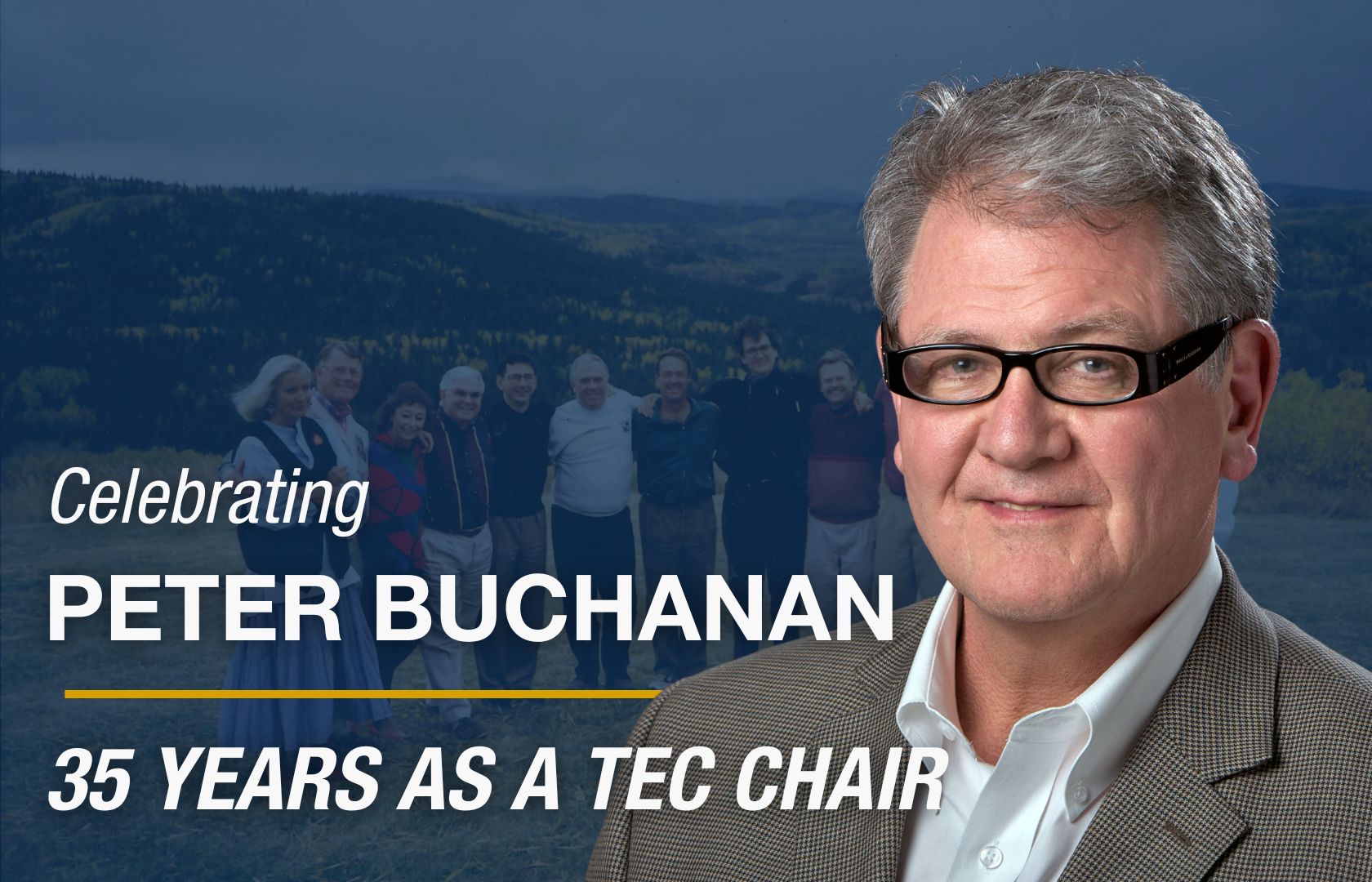 Congratulations, Peter Buchanan, on 35 years as a TEC Chair!

Believing in people’s ability to make a difference, one of Peter’s greatest passions is working with individuals who are sincerely committed to becoming better leaders and taking their businesses to higher levels of performance.

In addition to his commitment to being a TEC Chair for 35 years, Peter also sits on the Executive Team at TEC as the National Director of Chair Development, playing an integral role in setting new Chairs up for success.

With a passion for scuba diving and a father to five grown children, Peter resides in Lake Simcoe with his wife, Margaret.

We sat down with Peter to glean insight, enjoy some memories, and understand the impact TEC has had on him.

You’ve impacted business leaders in a myriad of ways. What impact has TEC had on you?

Almost 35 years ago, over a 3-6 month period, I noticed a real shift in one of my clients from my consulting company. He was becoming a more effective businessman and the only change I knew he had made over the past few months was joining something called a “TEC Group”.

Dr. Lynn Tanner had mentioned to his group that he wanted to grow TEC beyond Alberta, and this client of mine referred me to help. Soon, I found myself sitting in a boardroom in downtown Toronto meeting Dr. Tanner. He asked me to start this first TEC group in eastern Canada. So, I did.

Now, 35 years later, the work I do as a TEC chair is still connected to my sense of personal purpose. I derive joy from working with and helping other people, and TEC continues to feed that joy.

The Chairs I work with are all purposeful people. They do this work not just for the money, but to make a meaningful contribution to the world. 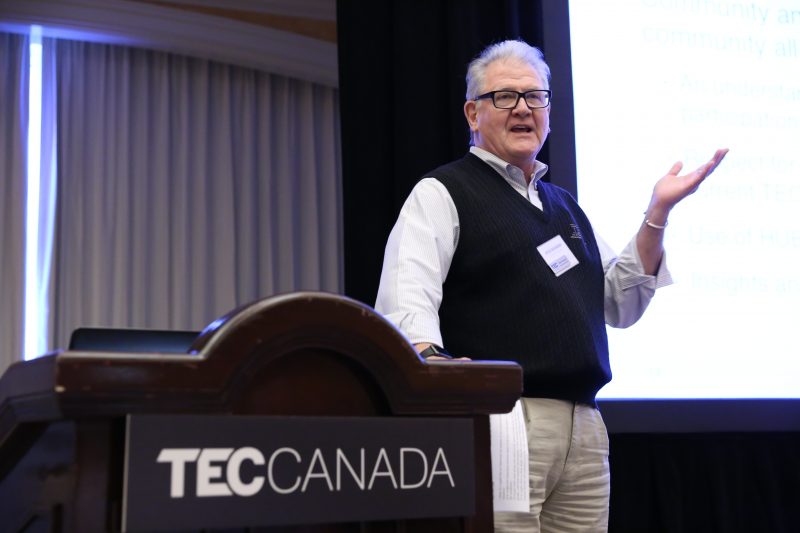 Peter Buchanan making a speech at a TEC Canada event.

What tip would you give to Canadian business leaders?

Never stop working on your emotional intelligence and relationship-building skills. For me, leadership is the ability to influence other people toward the attainment of your goal, and that influence is hugely based off the quality of the relationship you have with that individual.

Finesse your strategic planning skills. Many CEOs are great at building a business, but become unsure of how to make the next step and get lost in terms of scaling their business. TEC member companies who have access to peer groups and coaches tend to grow at a faster rate than those who don’t.

With TEC, the proof is in the pudding. Members tend to stay a long time because they receive significant value. I have heard members say that TEC has saved their life. 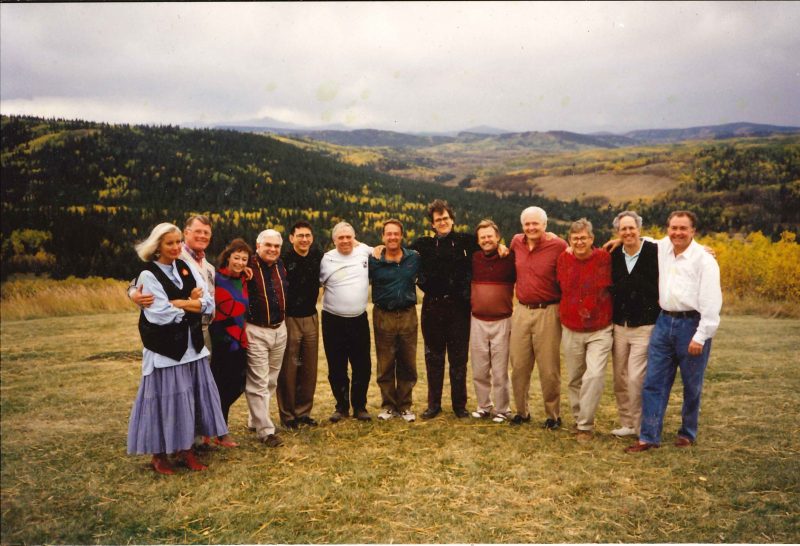 Peter Buchanan (sixth FROM THE left) WITH A GROUP OF CANADIAN TEC CHAIRS IN THE EARLY 90'S AT THEIR ANNUAL GATHERING.

Can you tell us about a memorable time or retreat you’ve had with TEC?

About 25 years ago, I brought two new group members to our annual retreat meeting and facilitated an exercise with the group that I had learned from Dr. Frederic Hudson, which had to do with a model of how we go through life transitions.

I created a large circle of duct tape on the floor with four quadrants, each representing a distinct phase of life as a business leader. I asked everyone to stand where they felt as though they currently were in their journey. Everyone scattered throughout the circle, and we took the time to talk with everyone about what it felt like to be in each of those places—what they were going through and where they felt they were going.

My two new members said it was the most powerful way they could imagine meeting a new group of people, and they both remained members for about 15 years. 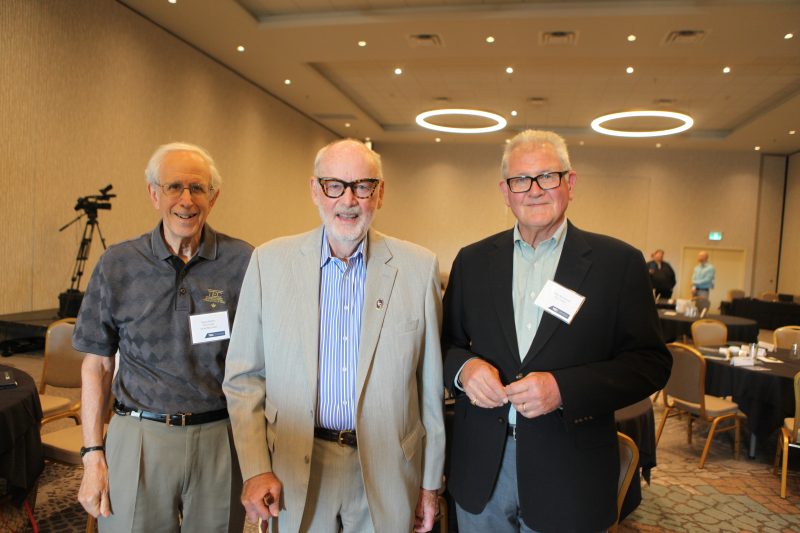 What has kept you in the role as TEC Chair for 35 years?

The learning community. From speakers, Chairs, and members supporting other members, the learning opportunities are endless.

In addition, the community of Chairs we have developed is amazing and abides by a real ethic to take time for one another. If you have a problem, challenge, or opportunity, fellow Chairs will always respond to a request for help. Connecting with other Chairs is an incredible way to grow.

What impact have you had on your members?

Thank you, Peter Buchanan, for playing such an integral role in leadership development here in Canada for over 35 years. Cheers to you!

Peter Buchanan (third from the left) with the TEC Canada Leadership Team.