Millennials in the workplace: A new era 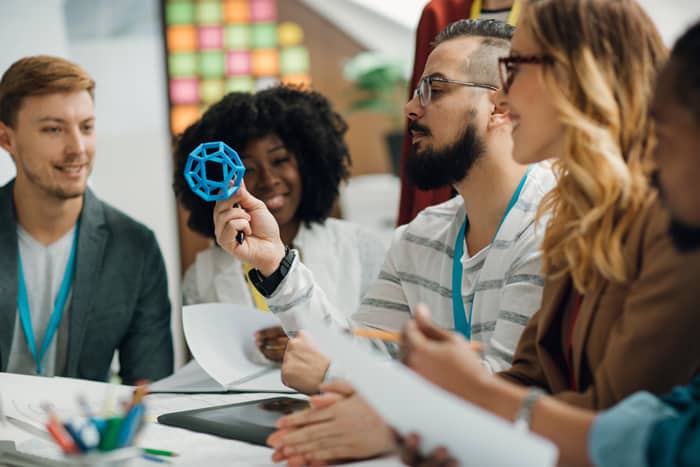 From the 1970s until recently, baby boomers were the largest generation in most workplaces. But times are indeed changing, as millennials in the workplace – those born between roughly 1981 and 2004 – have become the largest demographic.

With approximately 56 million workers ages 21 to 36 (as of 2017), more than one in three Americans in the labor force are millennials, according to a Pew Research Center analysis of U.S. Census Bureau data.

And just like the baby boomers before them, millennials are moving into leadership roles, changing the workplace and corporate culture through sheer volume and force of will.

What sort of changes should you expect from these up-and-coming millennial business leaders? Get used to more collaboration, openness and flexibility than ever before.

Who needs a corporate ladder?

Earlier generations, such as boomers (born 1946-1964) and Generation X (born 1965-1980), typically follow accepted business traditions when it comes to dress, standards of behavior and respect for the top-down corporate structure. Things are the way they are, and they’re OK with that – for the most part.

They expect something different, something more. If your company doesn’t give them what they want, they’ll change jobs in a heartbeat. And they’re pretty clear about that.

As a result, the corporate ladder of old has given way to a corporate “lattice,” as millennial workers hop from job to job, building experience that suits their particular interests.

For these young managers, this means the old days of having to work as a floor supervisor for 24 to 36 months before being promoted to department manager are gone.

Just because something has “always been done that way” doesn’t fly with millennials. If they feel they’ve learned all they can and are no longer challenged, they’ll move to another company willing to promote them after 12 months.

Older workers may perceive this type of behavior in their younger counterparts as restless or lacking respect for tradition.

But keep in mind, the millennial generation in general carries a mountain of student debt they’re motivated to pay down so they can buy their first house and start a family – and save for retirement.

From their point of view, they need a salary bump as well as new challenges, so why not change jobs?

Because many organizations are flattening their hierarchies in favor of less centralized processes, it means fewer management positions are available. This, in turn, means that leadership will emerge in other forms.

Millennials tend to believe you don’t need a title to be a leader. They believe leadership can come from heading a project or campaign, or training other team members.

Forget about getting permission or running it up the chain of command. Millennials grew up in a culture where they had a say in everything from their school lunch menu to the family budget.

This may be a difficult change in some industries, such as law or energy, where a traditional hierarchy is heavily engrained in the culture. It also may cause frustration for those workers who are more comfortable relying on someone with a certain title to make decisions.

But for millennials, leadership skills are about proactively taking the reins when they think something needs doing.

So, don’t be surprised if a millennial pops into a meeting they saw on the company-wide schedule, simply because they’re interested in what’s going on and feel it may apply to one of their projects.

They’re accustomed to collaborating and seeking input from everyone involved. In their minds, anyone can be a leader if they take the initiative.

Just get the job done – wherever you are

This is driven partially by the fact that they think nothing of using technology to work from anywhere. For these digital natives, work doesn’t necessarily shut down at 5 p.m., so don’t be surprised by 9 p.m. emails about tomorrow’s priorities.

Millennials’ desire for work-life balance is also driven by the fact that they’re now old enough to start having children of their own. They want more time and flexibility to take care of their family. That means, if life events happen during the day, millennial managers will tell their team to go for it – as long as the work gets done.

Got a parent conference at your child’s school at 8 a.m. and need to call into that staff meeting (rather than be there in person)?

Need to be home on a Thursday afternoon to get a new Wi-Fi router installed? That’s OK, too.

Millennial managers won’t be looking over your shoulder. If you deliver results, they’re not going to care where you are – or what you wear.

Remember those kids who broadcast every teenage breakup and college acceptance on social media?

Now they’re managing others with that same sort of openness.

Tradition once called for corporate information to be shared on a need-to-know basis. This style of command and control doesn’t work for millennial employees.

They believe everyone has a right to know (and needs to know) what’s going on in the company.

Technology has helped accelerate transparency because it cuts through levels of bureaucracy. Soliciting input from the entire organization is easy because there’s a way to contact anyone, anytime, anywhere.

Generation Y expects transparency and candidness across the company when it comes to information. They want open access to meetings and information, fewer hidden agendas and secrets.

For them, pay transparency (sharing pay ranges for positions and posting that information with job openings) just makes sense.

Every generation wants their work to have purpose and meaning. But millennials actually expect it, and they believe their employer should provide it.

For these young leaders, it’s about building their skills, while finding passion and excitement in their work. Their job needs to not only advance their interests and career on a constant basis – it also needs to allow them to contribute to the greater good.

Millennials stay motivated by fresh goals and challenges: new products, new campaigns, or a new team to manage. Their desire for new experiences feeds their need to be challenged. This also means they don’t shy away from change.

Baby boomers and Gen Xers may try to push back on the changes millennials are driving. They’re more likely to see their young managers’ propensity for new ideas, continual change and desire for buy-in from everyone as indecisiveness or a lack of experience.

But millennials will dismiss it and move on. They won’t be fazed.

They’re leading the march, and as managers, they place a premium on employees of all ages who embrace change, innovation and technology. And that’s good news for everybody who’s willing to keep learning and adapting to the demands of their organization and industry.

As more millennials in the workplace move into prominent roles across organizations nationwide, having the right people and processes in place is critical to ensuring these transitions are as seamless as possible